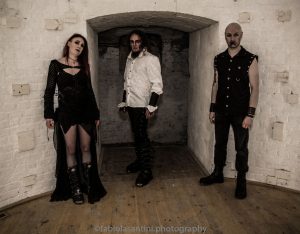 In March 2003 Brett (Bass/Vocals) and Dean (Guitars) got together for a series of jam sessions. It wasn’t the first time the two had played together having already attempted several musical combinations amongst their mutual friends. This time however the stripped down combination clicked and The Medea Project was born, the name coming from their mutual interest in mythology, and the darker side of the human condition.

The newly formed partnership thrashed out a couple songs and then started the search for additional members to complete the line-up. Matt (Drums) and Greg (Guitars) where recruited into the fold completing the first full line-up.

Their sound was dark and progressive and by the July they were ready to set foot on stage. During the next several months, they toured, cut a demo and managed to secure a small cult following. However due to musical differences, Greg and Matt decided to leave the band and The Medea Project was left with the two original members. The search for replacements lasted around 18 months but to no avail but Dean and Brett continued to write.

The Medea Project then went onto hiatus and Brett immigrated to England in 2011. However, the band did not die a complete death. It was pulled from the ashes when Brett (who was now playing guitar and doing vocals) was joined by Pauline (drums) and started reworking some of the original songs as well as writing new material. Excited by what was spawning, they went on the inevitable hunt for a bassist and Bradley (Bob) was conscripted to complete the current 3 piece line-up.

Although not conforming to a particular style, the sound is still dark but slightly more stripped down with elements of stoner, doom, death, black metal and gothic rock washing through.

We use cookies to ensure that we give you the best experience on our website. If you continue to use this site we will assume that you are happy with it.Ok