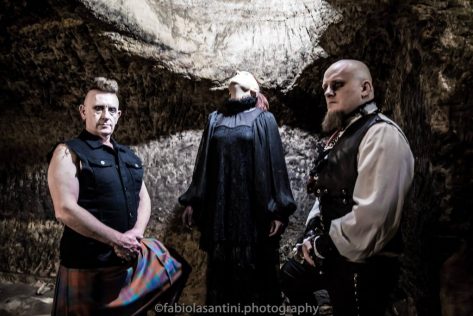 Our Story So Far

At the tail end of summer in 2003, on the unfashionable East Coast of South Africa, in a town known more for its weed and surfing than doom. The Medea Project arose from the minds of a few disillusioned individuals, burning fast and bright, bursting its way onto an unwary scene and then falling into a state of remission.  Not dead, always festering under the surface of guitarist and front-man Brett Minnie’s mind.

Fast forward to the present, albeit on different shores. Recruiting seasoned bass/keyboard player, Pauline Silver on drums, and newcomer Bradley Reimann on bass, The Medea Project was resurrected.

Fusing a down tuned wall of sound, raw tribal drum grooves, some punk DIY sensibilities, all interwoven with a touch of goth, death, black and stoner; The Medea Project unleashed itself on the unwary Kent and London crowds from March 2017 to September 2017 which included 2 headlining shows in London. During this period they recorded their first EP in April 2017, which was shortly followed by a music video featuring the single, “Babylon”. 2018 has seen them going from strength to strength including a short UK tour with Italian Ritualistic Sludge masters Nibiru and supporting Conan on the Nottingham date of their headline tour. This support date however was the end of the journey for Bradley, and true to form, Sean McElroy has been welcomed to the band on upright bass.

The Medea Project has been featured in Rockerilla, Rock Hard Italy , underground Lithuanian magazine Diovim as well as an upcoming article in The PainFucktory zine. They are also due back in the studio in August 2019 to record their debut album.

“As their opening track Babylon kicks off, the audience is engulfed in a vortex of intoxicating notes, perfectly crafted harsh vocals and a truly captivating drumming. Distinctiveness, confidence and stage presence abound: it’s hard to believe this trio only has an EP in their discography” – Rockerilla Italy – November 2018
“The Medea project…..never witnessed a band that made me want to drink red wine with Lord Byron (kiddies, ask yer parents) and then slaughter a goat , absolutely marvelous!” – Darren Storer – Three Years of Winter